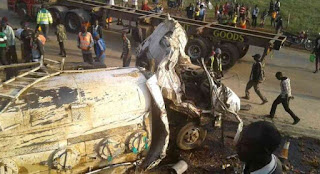 - The junction has been a black spot for years on the busy highway
- Construction works are ongoing at the scene causing major traffic snarl ups on the road
- The accident occurred after a lorry developed brake failure ramming into a matatu
At least 11 people have been confirmed dead following a bad accident at Kaburengu junction, just a few kilometers from Webuye town after a truck rammed into a matatu.
The Friday, December 21, 5pm accident occurred after the driver of the truck lost control and rammed into the static matatu on busy Eldoret-Webuye highway.
Confirming the deaths, Webuye OCPD Zaccheaus Ng'ameno stated that the truck lost control due to brake failure.
The truck then rammed into the matatu that was picking passengers at the busy and dangerous junction.
He said that only a young child survived.
"So far 11 bodies have been taken to Webuye Sub county hospital mortuary after the matatu was badly rammed into killing almost all passengers on board, the drivers of the ill-fated vehicles also succumbed to injuries," he said.
Ng'eno cautioned road users and drivers to be vigilant during this festive season to avoid such deaths.
Story by Titus Oteba, Bungoma County.