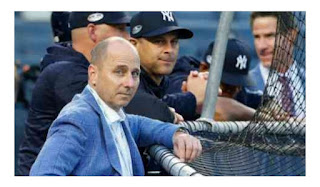 We've always known how evil the Yankees truly are, but now, we finally have a confirmation from the inside.
When asked about the rumors regarding Bryce Harper and his potential signing with the Yankees, general manager Brian Cashman admitted to the truth all baseball fans have always known:
Yes, a fully operational Death Star, indeed. There was never any doubt that the ​Yankees would be at play for Bryce Harper, as they have a tendency to sign big-time free agents.

But, c'mon. They really don't need another star going over to the dark side.
But despite the ever-present threat that Harper will sign with the Yankees, reports lately have noted that the Bronx Bombers are not quite the frontrunners in the sweepstakes. Instead, the ​Chicago White Sox are looking like the most likely club to add Harper this ​offseason.
Harper's decision has been long-awaited, and we're sure to be hearing more details soon. Until then, we'll just have to keep on waiting.