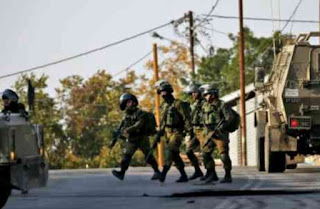 Members of the Israeli parliament gave preliminary approval Wednesday to controversial legislation enabling the forced displacement within the West Bank of Palestinian attackers' family members.
The bill comes after a wave of deadly Palestinian attacks against Israeli civilians and soldiers in the occupied West Bank, with its sponsors saying it would deter future attackers.
A statement from parliament noted the bill passed the Wednesday vote 69-38 in a stormy session, during which Arab lawmakers were expelled from the chamber for disrupting procedures.
The bill would enable the expulsion of family members from one West Bank location to another within seven days of an attack, or attempted attack, by their relative.
It will now be debated and voted upon in the parliament's foreign and defence committee, before returning to the chamber for final readings by lawmakers.
Education Minister Naftali Bennett, whose far-Right Jewish Home penned the bill, called Wednesday's vote "a huge step in the right direction" aimed at "ensuring the security of Israel".
"Every terrorist should know that his family will pay a price for his despicable deeds," he said in a statement.
The justice ministry, however, said such legislation would violate both Israeli and international law.
"There is legal prevention from advancing this proposed legislation," the ministry said in a statement on Monday. "In addition, this proposal creates significant difficulties in the international arena."
Even if passed, the legislation could subsequently be blocked if a legal challenge is launched successfully at Israel's high court.
On December 9, Palestinians opened fire at a bus stop near a West Bank settlement, wounding seven and leading to the death of a baby prematurely delivered after his mother was shot.
On Thursday, a Palestinian shot dead two Israeli soldiers at a bus stop and wounded others.
Another disputed bill, also tabled by the Jewish Home party, was on Wednesday approved in a preliminary reading by 61 votes to 47.