Klopp takes dig at Mourinho, calls him the most successful manager 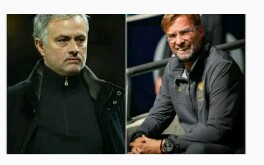 - Jurgen Klopp plays mind games with his opposite number Jose Mourinho
- The Liverpool boss says the Manchester United manager is the best in the world
- Both teams will square off at Anfield in a Premier League blockbuster on Sunday
Liverpool manager Jurgen Klopp has called under fire Manchester United manager Jose Mourinho “the most successful manager in the world” as both manager's sides prepare for a showdown at Anfield.
Mourinho has earlier taken a slight dig at the German manager about his failure to win trophies since becoming boss at the Merseyside club.
But the ex-Dortmund gaffer showed his class when he said: “Manchester United never ever show a lack of ambition. Mourinho is the most successful manager in the world and that’s how it is.
“I’m aware of the criticism but we switch off because there’s a lot of quality, speed and technique and they have pretty much everything.”
The Reds have remain unbeaten after 16 games this season while United are 16 points off the pace as they occupy sixth place.
But the former Chelsea boss who has won three trophies since joining the Old Trafford outfit hopes to end Liverpool's unbeaten streak.
Mourinho said: “It depends on the way you approach it. I think trophies matter, yeah. I think it matters, especially when you have the potential to fight for trophies.
“And especially when you clearly say that the objective is to win the trophy. I think sometimes just to say is not very intelligent.
"But when you have the potential, you have nothing to hide, you know from day one that your potential and your desire has a relation with the potential.”
Klopp's men are closely followed by Manchester City at the top of the table yet they have made no secret of their title ambitions this campaign.
Mourinho said: “To say we want to win - everyone can say that - but another thing is to say in a conscious way in relation to the potential you have.
“I don’t read much but I think Jurgen told already they want to win the Premier League, is their objective.”
PAY ATTENTION: Become a member of the leading sports Facebook group 'Naija Football Fan Zone'
The Reds are currently on top of the league standings with 42 points from 13 matches and are the only team yet to concede defeat this season.
On the other hand, United are gradually trying to climb their way back into the top-four as they occupy sixth on the log, 16 points off their opponents on Sunday.