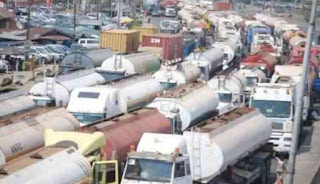 Truckers  have continued to  decry traumatic experiences from the lingering gridlock on Lagos ports access roads.
Truckers, a vital component of the logistics supply chain, on Saturday appealed to the Federal and Lagos State Governments to address the situation to save their lives and their means of livelihood.
The haulage operators under the aegis of Containerised Truck Owners (CTO) told the News Agency of Nigeria (NAN) in Lagos that they were being extorted  by security agencies while truck drivers were subjected to inhuman conditions.
They said that long queues encountered by truck drivers negatively affected their health and their vehicles.
CTO is a nascent amalgam of the Association of Maritime Truck Owners (AMATO) and the Container Truck Owners Association of Nigeria (COTOAN).
NAN reports that chieftains of the association have been holding meetings over the gridlock which keeps trucks about a month on port access roads.
The latest of such meetings was on Friday.
In a communique they issued after the meeting, CTO said: “We are hereby using this platform to beg the Federal and Lagos State Governments to urgently look into our plight, which has resulted in the following.
“ Untimely death of truck drivers while in queues of parked haulage vehicles and inability of the drivers on those parked truck queues to bathe, eat, sleep and rest adequately.
“Exposure of truck drivers in queues to regular harassment by street urchins, commonly known as area boys.
“Subjection of truckers to wanton extortion by countless security agencies at alarming rates ranging from N80,000 to N120,000 on every truck, depending on the particular operator’s power of negotiation.
“ Exposure of trucks in queues to vandals who constantly damage the vehicles and steal critical parts, which replacements further drain the lean purses of the operators.
`’Subjection of the drivers to serial brutalisation and dehumanisation by security operatives,” the group said.
NAN reports that the communique dated Dec. 15, 2018, was signed by Chief Remi Ogungbemi and Alhaji Wasiu Oloruntoyin, representing AMATO and COTOAN, respectively.
According to CTO, although increased delivery of imports and congestion at Nigerian ports characterise Christmas season, increased security challenges caused by criminal elements have added to the problems of truckers.
“ Ideally,  Christmas season spells good tidings and joy, but, in the current situation our members are contending with on Lagos ports access roads, it is  sorrow, tears and blood  for us except the Federal and Lagos State Governments hearken to our cries and save our lives and means of livelihoods.
“CTO hereby makes a passionate appeal to members of the public, especially those who reside on corridors where trucks are either queued or parked, to kindly lend their voices for sanity on the roads by prevailing on the concerned authorities to do the needful by introducing an automated system to regulate movement of trucks in and out of the ports, ’’ it said.