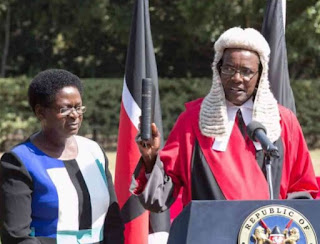 The past few years have seen ordinary Kenyans grow increasingly interested in developments within the Judiciary arm of government
Coinciding with the information age in which news is quickly and widely disseminated, every single ruling or order made in the corridors of justice is today open to public scrutiny like never before.

Ominously for judges and magistrates, their courtrooms have been oozing with negative vibes which have seen the Judiciary stand tall as a tower of black smoke.
Too many inexplicable rulings, particularly systematic dilly-dallying in punishing the rich compared to swift ruthlessness in condemning the lowly has not gone unnoticed.
Their zeal in suspending laws approved by Parliament and the Executive has been baffling; with all this made all the more suspect by visible hesitance in cooperating with these other two arms of government.
Inevitably, the custodian of justice is now widely seen to administrate injustice.
Luckily for the judges and magistrates, they have appeared largely immune to the absurd ruling they have been making; all until last week.
When Chief Justice David Maraga took to the stage to complain about embarrassing attacks by bloggers on the Judiciary, he ordinarily expected the audience to sympathise with him.
But the angry complaint boomeranged on him as President Uhuru Kenyatta instantly reminded him and the entire Judiciary that the attacks were a self-inflicted wound that courts refused to fix in 2018.
The president made it clear that Judiciary lost an opportunity to solve the problem when it dismissed as ‘unconstitutional’ the Computer Misuse and Cybercrime Act of 2018.
Government had introduced the law to tame disruptive blogging, including insults to people on social media platforms.
High Court Judge Chacha Mwita suspended sections of the cybercrime law in May 2018 after Bloggers Association of Kenya sued Attorney-General, Speaker of the National Assembly, Inspector-General of Police and Director of Public Prosecutions over the new law.
With the Act still suspended, Uhuru thus urged Maraga, just like other leaders, to develop a thick skin against attacks from the unruly bloggers.
This was a significant moment as it was hammered into the Chief Justice and his crew that they were merely getting a taste of their own medicine; ghosts they have been unleashing on Kenyans had come back to haunt them.
It particularly looked bad on the CJ that he appeared detached to rulings made right under his nose, or too emotional that he dived into the deep end with gumboots on.
Not many people in his position would have introduced such a topic given the all too obvious outcome.
Increasingly, it seems, members of the Judiciary have to realise they do not exist in a vacuum.
All decisions they make, regardless of weight, stand to affect everyone bound by the laws of this land and is often a matter of time before it catches up with them, in one way or another.
For instance, while they have been highly uncooperative in convicting individuals who embezzle public resources, it should not be lost on them that corruption greatly hinders development and this will directly affect them, their families and villages.
They might live in the pushiest houses and drive fanciest of cars but a crime surge fuelled by high unemployment rates, a by-product of corruption, will make their lives a nightmare.