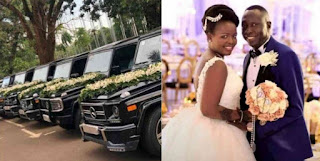 - A couple in South Sudan have caused quite an outrage on social media due to the cost of their wedding
- The couple who are known dignitaries reportedly spent about a billion dollars on their wedding
- Social media users were furious at the amount, stating that their are so many people suffering in South Sudan
The personal assistant to President Salva Kiir Mayardit of South Sudan has reportedly tied the knot with her boo in an extravagant wedding that got people talking on social media.
It was gathered that the lady married someone who also has a link to an ambassador. According to reports, the wedding cost about a billion dollars.
A Twitter user identified as Sudhir Byaruhanga had alleged in a tweet, that the decoration for the wedding cost two hundred million. He also noted that they booked three venues for one week.
He said: "A wedding at Serena that cost about a billion. The bride is a PA to S Sudan president Kir while the groom is linked to the ambassador. They said deco alone cost 200 m... hired three halls at Serena for one week."