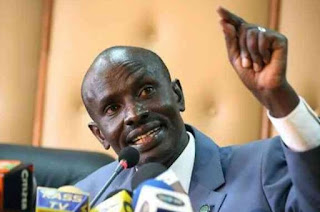 - A conciliation team appointed by Labour CS Ukur Yattani has failed to solve a stalemate between TSC and KNUT
- The two parties maintained their hard line positions making it difficult to find a solution
-TSC maintained promotion of teachers was based on a number of factors and not qualifications only
- KNUT maintained it would keep pushing for promotion of teachers based on qualifications and merit
A teachers' strike is in the offing after the conciliation team appointed by Labour Cabinet Secretary Ukur Yattani failed to solve the stalemate between Teachers Service Commission and the educators.
The mediation team led by Labour relations officer Charles Maranga failed to reconcile the two groups with each side holding hard line positions
Kenya National Union of Teachers (KNUT) under the leadership of Wilson Sossion maintained it would keep pushing to have promotion of teachers to be based on merit and performance and not anything else they have not approved.
Macharia further argues that promoting teachers based on higher qualifications would be contrary to their collective bargaining agreement signed by parties.
In it's response, KNUT said it was not seeking promotion of teachers on the basis of higher qualification but also as a matter of law, regulations and practice.
“The code of regulations for teachers has neither been amended nor repealed, and cannot be repealed or amended by a policy document. It's recognition and adoption of scheme of service is anchored and protected in law,” says KNUT in a memorandum signed by secretary-general Wilson Sossion.