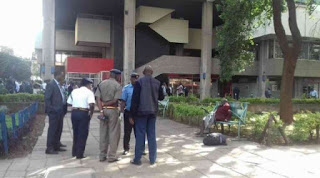 There was a scare after an unidentified man was found dead while seated on a bench at Nairobi's Aga Khan Walk on the morning of Tuesday, January 19.
According to security officers manning Kenya Cinema, the middle aged man arrived at the scene at around midnight while carrying a luggage.
However, at around 5am in the morning, his trouser and a pair of shoes he was wearing were all missing and he was half naked.
It was feared he could have been robbed of his belongings even though there was a black bag next to him which was suspected to be his.
Early morning risers who passed by on their way to work managed to cover his nakedness.
On noticing he had stayed immobile for too long, guards alerted police officers who later found few medicines in his jacket lending credence to claims the old man may have succumbed to sickness.
His body was taken to hospital for postmortem examination as investigation continued.