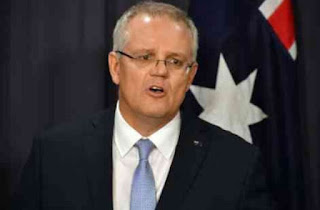 By Agence France-Presse
Australia on Monday said a “sophisticated state actor” had hacked the country’s main political parties and parliament, just weeks before a closely fought election.
Prime Minister Scott Morrison told lawmakers security agencies looking at a hack of lawmakers “also became aware that the networks of some political parties; Liberal, Labor, and Nationals have also been affected”.
PM Scott Morrison(AFP / MANILA BULLETIN)
“Our cyber experts believe that a sophisticated state actor is responsible for this malicious activity,” he said, without mentioning any specific country.
“Our security agencies have detected this activity and acted decisively to confront it. They are securing these systems and protecting users,” he said.
Earlier this month authorities reported a “security incident on the parliamentary computing network” forcing users — including the prime minister and the cabinet — to change passwords and take other security measures.
The Australian Signals Directorate confirmed it was working with the parliament in response to the attack, giving a strong indication that sophisticated actors were suspected from the start.
Speculation has focused on China, although there is no official finger pointing at Beijing and cyber experts frequently warn that attribution is time-consuming and difficult.
Australians are expected to go to the polls in mid-May, raising the specter that hackers could be trying to influence the outcome of the vote, or change the tenor of the debate.
Morrison said “there, is no evidence of any electoral interference”.
“We have put in place a number of measures to ensure the integrity of our electoral system.”
He added that the Australian Cyber Security Centre stood ready to help any party or electoral body in need of support.
“They have already briefed the Electoral Commissions and those responsible for cybersecurity for all states and territories.”