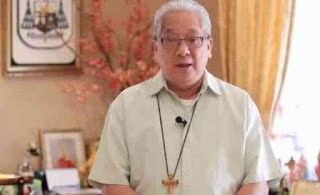 By Leslie Ann Aquino
Parents were urged by Caceres Archbishop Rolando Tria Tirona to submit their children to vaccination amid the measles outbreak in the country.
Archbishop Rolando Tria Tirona(Cartias Philippines via YouTube / MANILA BULLETIN)
“The archdiocese joins the health department in Bicol in appealing to parents to have their children vaccinated by going to the barangay health centers,” he said in a CBCP News post.
Health officials earlier attributed the low vaccination rate to the scare caused by the Dengvaxia controversy.
“Let not the unfounded fear of the vaccine affect the lives of our children,” Tirona said.
“We are saddened by the many reported deaths of our children, mostly from poor families and communities,” he added.
The archdiocese also urged the cooperation of all concerned agencies, NGOs, civil society, and churches to work together in response to the measles outbreak.
The Department of Health reported that there were more than 20,000 measles cases recorded as of December 2018, a 500 percent increase from 2017.
The outbreak has also caused at least 136 deaths, with majority of the fatalities having no history of vaccination.
In Bicol region, at least 54 new cases of measles were recorded from Jan. 1 to Feb. 2, 2019.