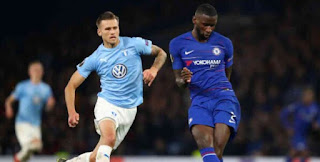 - Chelsea vs Malmo ended in a 3-0 win for the Blues at Stamford Bridge
- The west London club made it through to the last 16 of the Europa League
- The Blues are gearing up to play Manchester City in the Carabao Cup final
Chelsea vs Malmo round of 32 Europa League match ended in a 3-0 win for the Blues as they qualify for the next round of the competition.
The Swedish side came into the match against Maurizio Sarri's men who have been in disastrous form since the New Year, more ambitious.
The Blues who won their first away game to Malmo in the first leg were on the back foot as Rasmus Bengtsson almost put the visitors ahead in the fourth minute from a cross, but ball sailed just wide.
The Scandinavians showed more intent in the early exchanges of the match but failed to make their half-chances count.
Olivier Giroud who was handed a rare start by Sarri had his side-footed shot blocked defender Behrang Safari as it was heading goalwards.
The first 45 minutes ended goalless but Malmo went into the break the happier side with their performance, but it was not enough to cancel the deficit.
Giroud finally broke the deadlock afte N'Golo Kante made a 20 meter from his half into his opponents' as laid it on the right for Willian who found the Frenchman for an easy tap-in. Chelsea were 1-0 ahead and 3-1 on aggregate.
It was massive relief for Sarri on the bench after his side went up in the 51st minute which could boost his team's confidence against Man City ahead of Sunday's Carabao Cup final.
things went from bad t worse for Malmo as Bengtsson who was one of five Swedish players booked got his marching orders in the 73rd minute.
Then in the 74th minute, Ross Barkley who started in place of Jorginho in the midfield, curled in a beautiful free kick just out the 18-yard box to make it 2-0.
Ten minutes later, the new kid on the block Callum Hudson-Odoi at Stamford Bridge put the lead beyond doubt with a low driven shot as he made it 3-0 and 5-1 on aggregate.
Chelsea will be taking the positives from the match as they prepare to face defending champions of the Carabao Cup, City, at the weekend at Wembley.