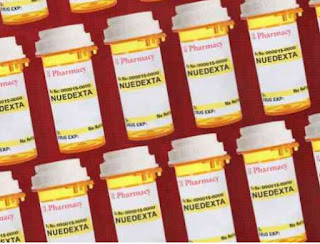 A pharmaceutical company that aggressively marketed a drug to nursing home residents now faces significant financial penalties as the result of an investigation by the Justice Department.
Avanir Pharmaceuticals was the subject of a 2017 CNN investigation that found inappropriate and potentially fraudulent use of its main drug Nuedexta in elderly dementia patients since its release in 2011.
On Wednesday, Avanir publicly acknowledged the DOJ investigation in a press release stating it had reached a tentative agreement with the agency related to certain sales and marketing of the drug prior to 2017. Details of the deal, including civil and criminal agreements, are still being finalized.
But financial filings from Avanir's parent company, Otsuka, estimate that the agreement could result in $120 million in fines, restitution, legal fees and other liabilities. The DOJ declined to comment to CNN.
Read the original investigation into Nuedexta
Nuedexta is only approved by the federal government for a rare condition characterized by uncontrollable laughing and crying, known as pseudobulbar affect, or PBA. While this can occur in patients with neurological conditions such as dementia, medical experts interviewed by CNN have said that it is not common in this group of people. The drugmaker itself acknowledges in prescribing information that Nuedexta has not been systematically tested in the elderly.
Avanir said it could not comment on the specifics of the agreement, but said it "is deeply committed to regulatory and legal compliance, as well as the health and safety of the patients we serve." It has previously said the company is committed to "an ethical culture," that PBA is often "misunderstood" and that the condition can affect people with dementia and other neurological disorders, which are common among residents in long-term care facilities.
The federal government has footed much of the bill for Nuedexta in the form of Medicare Part D prescription drug funding, for people 65 and over and the disabled. Updated government data shows that in 2016, this Medicare program spent $200 million on Nuedexta -- up more than 600% from four years earlier.
Internal company emails obtained by CNN in 2017 revealed questionable sales tactics and that Avanir sales representatives were encouraged to directly target dementia and Alzheimer's patients. One email from a regional manager urged salespeople to spend "99.9 percent" of their time focused on dementia patients. Devoting time to other conditions more commonly associated with PBA amounted to "diluting your chances," the manager wrote. "Give yourself the best chance to win."