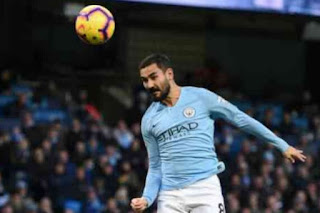 Having been rejected as an eight-year-old by Schalke 04, Ilkay Gundogan is relishing returning to Gelsenkirchen with Manchester City in what could potentially be a one-sided Champions League clash.
While Pep Guardiola's high-flying City are top the Premier League table, Schalke, Wednesday's opponents in the last 16, first-leg clash, are just above the Bundesliga's relegation places and struggling to score goals down in 14th place.
Like City's Germany winger Leroy Sane, Gundogan, 28, began his career at Schalke's academy, but despite having been rejected as a child after only one season, there will be no element of revenge come kick-off at the Veltins Arena.
"I have (forgiven them), but it wasn't always so," Gundogan told German magazine Kicker with a grin.
"At the time, due to growth spurts, I had physical problems and couldn't play any sports for half a year, so I dropped out.
"Three or four years later, Schalke attempted to contact me, but I was a bit resentful.
"I just wanted to play football with my closest friends rather than be back in an academy."
- Danger as favourites -
Gundogan ended up playing for local club Hessler, joining Bochum as a junior before playing Bundesliga football for Nuremberg, he then spent five years at Borussia Dortmund from where he joined City in 2016.
On paper, City could run riot in Germany, but Gundogan insists the Mancunians will take nothing for granted.
"There is a danger as everyone thinks Schalke don't have a chance and even though it's an away game, we're expected to dominate," said Gundogan.
"Schalke have nothing to lose - we have a lot - which raises the pressure on us."
Schalke last reached the Champions League quarter-finals in 2011 when ex-Real Madrid legend Raul inspired their run before losing in the last four to Manchester United.
Head coach Domenico Tedesco insisted they can still shock City despite Saturday's drab goalless draw at home to Freiburg left them winless in their last three league games.
Gundogan is looking forward to playing in his home city.
"My family and friends are still there, I have had to organise a few tickets," he said.
"I am looking forward to the game, because I grew up there and a lot of people were Schalke fans."
- Erdogan scandal -
However, there is a chance Gundogan could be booed in Gelsenkirchen.
A rare appearance back in Germany will be a test in the wake of last May's scandal when he and Arsenal midfielder Mesut Ozil sparked controversy by meeting Turkey president Recep Tayyip Erdogan in London.