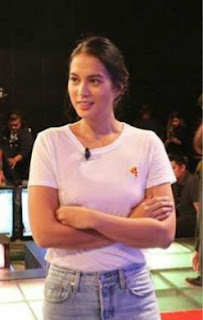 Actress-model Isabelle Daza does her part in keeping a harmonious relationship with her helpers at home.
In a recent interview on “Tonight With Boy Abunda,” she revealed that she drafted a contract for their housemaids, upon the prodding of her husband, Adrien Semblat.
Isabelle Daza (Instagram)
According to her it’s a good way to “protect both parties.”
Recall that it was last month when she shared on her Instagram story the actual contract she gave to her helpers. It listed down their deliverables, number of days off in a month, sick leaves, benefits or the things that she will provide them, among others.
Isabelle believes this help her housemaids feel “secure” and “proud” of their jobs.
Also on the contract is the helper’s job description as well as their rights as an employee, like working hours of eight hours a day with breaks and weekends as rest days.
However, she also pointed out her rules like “not to reply ‘wala’ if they haven’t checked” and “they can’t borrow money or advance unless it’s an emergency.”
Despite, her helpers also get benefits like contribution to the Social Security System (SSS), Philhealth, and Pag-ibig.
When the host, Boy, asked what the reaction of the helpers were when she brought up the idea of a contract?
“They were very touched,” she answered. “Because they didn’t feel they deserve one.”
“Also if something happens, you can’t be mad at them when you forget your charger when that’s not their job,” she related. “It also gives them dignity to have a piece of paper. Of course, people are always scared to lose their jobs, right? So I also had to explain to my helpers that ‘Listen, I can’t fire you just because I’m in a bad mood or I’m hungry.’”
On the other hand, Isabelle also encourages her housemaids to save up.
“I gave them a bank account, I said ‘Okay, ’pag December na titignan ko kung magkano na naipon mo and dodoblehin ko,’” she shared. “I think that gets them to have a target also. And that makes them feel that this isn’t finite, this amount, every month.”
She added she would also give them different ideas to help them reach their goals.
Actually, the actress divulged that prior to her giving the contract she also distributed a questionnaire and asked questions like “What makes them sad,” “When are they at the happiest” so that the actress also know a little bit more about them.
The 30-year-old first-time mom noted she does thing to have a healthy working environment.
“Also it’s really treating people right and having humanity,” she pointed out.