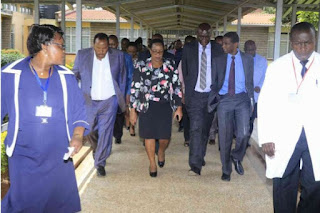 With the next General Election being three and a half years away, Kenyans appear to have learnt how to boldly express their disapproval of politicians who are openly engaging in premature 2022 campaigns.
This has worked as a number of politicians in team Tanga Tanga - a name coined by President Uhuru Kenyatta to describe leaders who had been restlessly traversing the country drumming up support for 2022 presidential candidates, read the public mood and stopped the early campaigns.
But there are still some leaders like Kiambu Governor Ferdinand Waititu who are yet to heed the call to jump off the politicking bandwagon and focus on solving problems affecting their people.
Waititu spent the past weekend in Kakamega county actively campaigning for Ruto’s 2022 candidature.
It was a move many people have rightly faulted, considering the pressing issues in his county.
The health sector - which is a devolved function that governors are fully in charge of - in Kiambu needs urgent fixing.
At least 60 babies have died at Kiambu Level 5 Hospital under unclear circumstances in the past two months leading to a national outcry.
Patients were forced to buy their own blankets and others personal utilities before getting admitted to the facility and other health centres across the county.
Even more nightmarish news came out later after doctors at the Level 5 Hospital declared a 20-day-old baby dead and even issued a burial permit, only for the parents to realize the boy was not dead minutes before burial.
The fact that the health crisis in Kiambu is not only embarrassing but life-threatening points to Waititu’s misplaced priorities.
He must focus on this critical issue among others before he can take to the podium to dance to the 2022 tune.
Regrettably, Kiambu Level 5 hospital was only recently a shining example of what devolution could do in turning around county healthcare facilities.