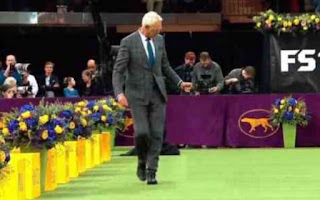 US chat show host Jimmy Kimmel has released his annual video of a dog-less Westminster Dog Show.
Every year, Mr Kimmel’s producers use camera technology to edit out the dogs from the prestigious show, leaving their human owners looking "even sillier" as they parade around the arena.
“A few years back,” Mr Kimmel explained, “we started what has become a tradition on our show.
"I noticed there was a lot of green on the ground at the dog show, which lends itself to green screen technology to eliminate the dogs from the show.
“And the result is owners who look even sillier than they usually do.”
It came after a chunky bulldog named Rudy stunned crowds with his speed during the show’s agility competition.
Jet-heeled Rudy flew through tunnels and jumped over seesaws to complete the course in 46.63 seconds.