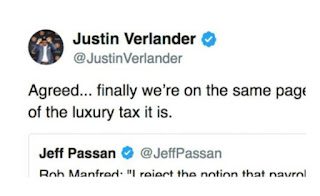 So let's check the score. Justin Verlander: 1, Rob Manfred: 0.
On Sunday, Houston Astros veteran pitcher Justin Verlander expressed his discontent over some of the MLB rules with commissioner Rob Manfred over twitter.​
The rule Verlander is referring to is the "competitive balance tax", better known by baseball fans as the luxury tax. The rule deems that if a team wishes to spend more than the league mandated salary cap for players, they have to pay a tax to be allowed to do so.
This rule has allowed many of the MLB's wealthier organizations to outbid other teams for star players, as the luxury tax would be nothing to them.
Manfred, however, has continued to insist that having the highest payroll in baseball means nothing, despite clear evidence to the contrary.
While Manfred would like to distract from the fact by mentioning the success of teams which build from within, he cannot deny that adding top talent with top dollar gives said franchise a better chance at winning.
While the abolishment of the luxury tax may actually end up helping the MLB balance its competitiveness, don't expect it to go anywhere anytime soon. The MLB already has tax thresholds set until the year 2021.