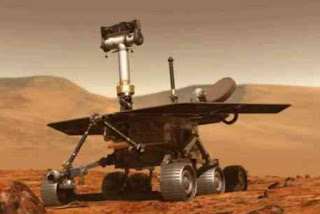 Nasa has declared its 14-year Mars Opportunity rover mission as finished after the device died on the red planet.
The space agency made the announcement after it tried one last time to contact Opportunity, which had been silent since June.
Thomas Zurbuchen, Nasa’s associate administrator, said at a conference on Tuesday evening: “I was there yesterday as these commands went out into the deep sky. I learned this morning that we had not heard back. It remains silent.
“I am standing here, with a sense of deep appreciation and gratitude, that I declare the opportunity mission as complete.”
Jim Bridenstine, Nasa administrator, added: “This is a celebration of so many achievements. When this little rover landed, the objective was to have it able to move 1,100 yards and survice for 90 days on Mars.
“Instead, here we are 14 years later, after 28 miles of travel, and today we get to celebrate the end of this mission."
Mike Watkins, director of Nasa's Jet Propulsion Laboratory, said: "Opportunity may be gone, but it leaves a legacy. That's a legacy of a new paradigm for solar system exploration.
"We set out together on a mission of discovery and it worked longer than any of us thought possible.
"That legacy continues, not just in the Cuiroisty rover, which is currently healthy on Mars, but also for our new 2020 rover, which is under construction here."
Read more
Snowman shaped space rock is actually flat, NASA says
Opportunity had been victim of one of the most intense dust clouds in decades. The dust had blocked sunlight from the spacecraft's solar panels.
Its achievements included confirmation water once flowed on Mars, while it was by far the longest lasting lander on the red planet. Its identical twin, Spirit, was pronounced dead in 2011, a year after it got stuck in sand and communication ceased.