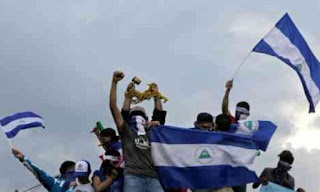 Two opposition leaders in Nicaragua were handed sentences of more than 200 years on Monday for participating in violent protests last year against President Daniel Ortega that left 325 people dead, their lawyer said.
Medardo Mairena was sentenced to 216 years in prison for "terrorism" and six other offences related to his participation in the protests that caused the death of four police officers and a civilian, said lawyer Julio Montenegro from the non-governmental Permanent Commission for Human Rights.
Pedro Mena was given 210 years for terrorism and other offences.
Montenegro described the sentences as "unprecedented" and "overly exaggerated."
The two opposition leaders will serve only 30 years in prison, though, as that is the maximum allowed in Nicaraguan law.
Mairena is one of the leaders of the Civic Alliance for Justice and Democracy, an opposition group that was formed in May to try to find a solution to the country's political crisis through dialogue with the government.
Protests had begun in April and escalated quickly as they were met by a brutal government crackdown.
The talks broke down in June as Ortega refused the opposition's main demands to step down and bring forward presidential elections.
Protests lasted until October and as well as the many dead, more than 750 people were arrested and accused of terrorism.