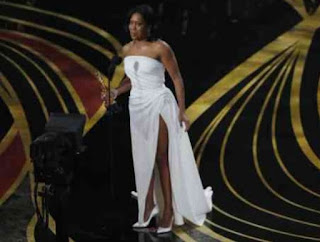 LOS ANGELES, (Reuters) - Regina King won the Oscar for best supporting actress on Sunday for her role as a mother trying to look out for her pregnant daughter in "If Beale Street Could Talk."
It was the first Oscar for King, 48, who began her career in Hollywood more than three decades ago as a teenager on the 1980s sitcom "227."
In the Barry Jenkins-directed "Beale Street", King plays the mother of a pregnant young woman whose future is ruined when her boyfriend is imprisoned for a crime he did not commit.
A prolific actress known for her mix of grit and warmth, King for decades has been a fixture on television and in movies, largely in supporting roles. Her breakout film role came in 1996 when she played the wife of Cuba Gooding Jr.'s character in "Jerry Maguire."
This was the first Oscar nomination for King, who has claimed three Emmy Awards in recent years. She also won a Golden Globe Award earlier this year for her "Beale Street" role.
King has also been an outspoken advocate for gender and ethnic diversity in Hollywood. In her acceptance speech at the Golden Globes, she pledged that women would make up half of the staff on all of her projects in the next two years, saying "it's going to be tough."
Other nominees in the category included Amy Adams, Marina de Tavira, Emma Stone and Rachel Weisz.
(Reporting by Nichola Groom; Editing by Sandra Maler)