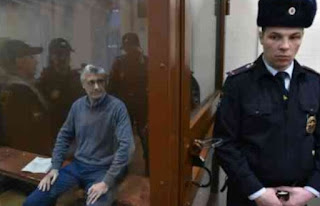 The arrest in Russia of prominent US and French investors on suspicion of fraud has sent shockwaves through Western business circles and sparked fears of cutbacks in foreign investment sorely needed for economic growth.
The founder and employees of the Baring Vostok private equity firm were arrested on Friday in a case brought with the help of the FSB security service.
The arrest took place on the same day Russia hosted leading business people in the Black Sea resort of Sochi for a major economic forum which trumpeted the country's openness to investment.
Michael Calvey, a US citizen and the founder and director of Baring Vostok, has been placed in pre-trial detention in a Moscow jail for the next two months for alleged fraud, along with five others -- including Philippe Delpal, a French citizen.
They are accused of defrauding Vostochny Bank of at least 2.5 billion rubles ($37.7 million). All of them deny any wrongdoing and blame the case on a shareholder dispute.
In an opinion piece on Monday in the Vedomosti business daily, Maxim Bouev -- vice-rector of Moscow's New Economic School -- wrote the case proves what investors have long known: "If you want to invest in Russia, you have to accept your risk of eventually being arrested and finding yourself in the dock."
This is the latest in a long line of cases in which top business people have been accused of crimes motivated by commercial or political interests, but these have rarely involved foreigners.
Business figures and economists reacted strongly to investigators swooping on Baring Vostok, founded 25 years ago, which has brought in investments of more than $3 billion to Russia despite the geopolitical tensions and Western sanctions of recent years.
Arkady Volozh, the CEO of Russian internet giant Yandex, defended Calvey in a statement, saying he "has always been a standard for the market of decency and law-abidingness".
- 'Hateful image abroad' -
Other business leaders said they fear the case will deal a severe blow to an investment climate already marred by corruption and the lack of independent courts -- especially given the strong-arm tactics employed.