Sarri: I Prefer Jorginho To Kante 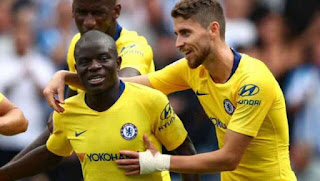 Chelsea manager Maurizio Sarri has hinted that he will not return N’Golo Kante to his natural defensive midfield role because the Frenchman cannot move the ball quickly enough.
Kante, 27, has been used in a more advanced position under the Italian this season, while Sarri have preferred summer arrival Jorginho in the deeper midfield position.
The World Cup winner has scored four times in 35 appearances all competitions for the Blues this season but Chelsea’s recent dip in form has prompted concerns at Stamford Bridge.
Sarri come under pressure amid Chelsea’s dip in form. Since late-January, the Blues have suffered defeats to Arsenal, Bournemouth and Manchester City in the Premier League and crashed out of the FA Cup with a loss to Manchester United on Monday.
There are reports that the club have given him three games to save his job, making the second-leg of their Europa League tie with Malmo on Thursday a crucial clash before they face Manchester City in the Carabao Cup final.
As he looks for a way to salvage his side’s season, Sarri was asked if his insistence on playing Kante out of his natural role could be harming his side, and the Italian explained the France star does not have the right characteristics to play there in his style.
“In that position, I want a player able to move the ball very fast,” he said at a press conference.
“This is not the best characteristic of N’Golo. N’Golo is very useful for us, but this one is not his best characteristic.”
When it was pointed out that the midfielder has won a World Cup and two Premier League titles, Sarri replied: “But in another system.”
Sarri’s tactics have recently been criticised by fans, who voiced their disliking of them in song during the loss to United, but the 60-year-old is sticking to his system.
“The system is a false problem,” he added.
“I know very well that when we’re losing, I have to put a striker on the pitch. When we’re winning, I have to put a defender on the pitch. But I want to see the football in another way.
“I can understand very well the frustration of our fans because they are used to winning. And now we are in trouble so I can understand it very well. But there isn’t another way. We only need to have good performances and good results.”
After the conclusion to their Europa League last-32 tie and the battle for silverware with City, Chelsea return to league duty with a match against London rivals and third-placed Tottenham.
With so many important games in such a short space of time, Sarri is scrambling to find a solution to his side’s issues.
“As you know very well, it’s not very easy because we have no time,” he said. “But we are trying to solve our problems. It’s not easy. Because, on the pitch, we have no time at the moment. But we are trying to talk with the players. We are trying to avoid some mistakes by video. But it’s not easy because we have to play every three days. On the pitch, we have no time.
“I have to think we are able to improve, and able to improve immediately. The result is not all in a match. In the last match we played better, better and better, especially in the first half. We have to solve a big problem because we stayed in the other half for 75 minutes out of 90 and were not able to score.
They only played 15 or 16 balls into our box and scored two goals. So we have to solve this problem: a problem of aggression and determination in both boxes.”