Sarri Keeps Cool As Fans Turn On Him 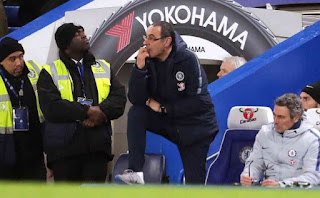 Maurizio Sarri says he is not concerned about the Chelsea fans turning on him during the FA Cup loss to Manchester United. The Blues lost for the third time in five matches, via a 2-0 scoreline at Stamford Bridge that perhaps flattered their performance.
Following a promising start they were convincingly outclassed by United, who impressively responded to their first defeat under interim manager Ole Gunnar Solskjaer to progress to the quarter-finals where they will visit Wolves.
The visitors built their lead through first-half headers from Ander Herrera and then Paul Pogba as Chelsea’s supporters turned on their manager by chanting “f*** Sarri-ball”.
Related: Azpilicueta says Chelsea face crucial fortnight
The 60-year-old, however, remained relaxed as he said: “I am worried about the results. Not about the fans. “I can understand the situation and our fans, because the result wasn’t really good. We are out of the FA Cup, so I can understand. But I am worried about our results. “We were unlucky. In the first half we played better than the opponent and, at the end of the first half, it was 2-0 to them. So we played confused football in the second half. But, in the first half, we played well. We need, of course, more aggression, more determination. “If we are able to win three or four matches in a row, it will be really very easy (to change the negative mood).”