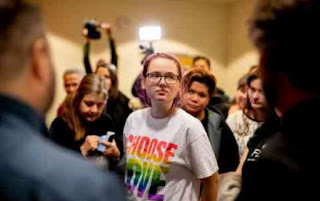 A Swedish activist has been fined for delaying a flight due to deport an Afghan asylum seeker
Elin Ersson, a student at Gothenburg University, was handed a fine of 3,000 Swedish krona (£250) after being found guilty of violating the country’s air safety rules.
The 22-year-old broadcast footage from the plane live on Facebook last July. It has since had over five million views..
In the video, she can be seen refusing to take her seat or get off the Turkish Airlines flight as she announced that a man on the plane was being deported to Afghanistan by Swedish immigration services.
Read more
Leeds 'spygate' latest: EFL fine club £200k after Bielsa admission
Airline staff can be heard in the footage attempting to take the woman’s phone.
She urges other passengers to stand up. As the footage continues, other passengers stand up in solidarity while others can be heard complaining.
Eventually Ms Ersson is told by a member of staff that she would be allowed off the plane with the asylum seeker.
The woman's actions divided opinions with some praising her for her protest while others choosing to criticise the delay of the plane.
After the incident Ms Ersson told Metro: “It is time to talk about the situation, it is time to see the people whose life we are destroying, it is time to stand up.”
Ms Ersson’s lawyer Tomas Fridh told the Guardian that he would appeal the court’s decision.
He said: “Elin’s ambition was not to commit a crime or break the law – her protest might be seen to have an element of civil disobedience, but in this case what was right was also legal.”