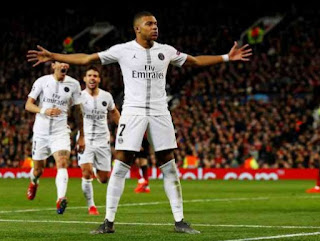 Paris Saint-Germain ended Manchester United 11 game unbeaten run under Ole Gunnar Solskjaer defeating the Red Devils 2-0 in Tuesday’s UEFA Champions League last-16 clash at Old Trafford.
Former Manchester United man Angel Di Maria provided the assists for Presnel Kimpembe and Kylian Mbappe who struck before the hour mark to give the visitors a two goal lead ahead of the second leg in Paris, France.
Marcus Rashford had the first chance at goal but his firece shhot was saved by Gianluigi Buffon. Buffon was called into action again in the 16th minute when he cut out Paul Pogba’s low cross from the right after the French midfielder has beaten Presnel Kimpembe far too easily down the right flank.
The best chance of the opening 45 minutes fell to Paris Saint-Germain just before the half-hour mark when Marco Verratti and Julian Draxler combined to send Kylian Mbappe through inside the area, but the winger could not squeeze his shot inside the near post on the slide.
The opening goal came from the resulting corner as De Gea and Nemanja Matic left Di Maria’s inswinging delivery for each other, allowing Kimpembe to steal in and volley the ball into the roof of the net from close range.
Suddenly PSG looked every bit the fearsome attacking outfit that had scored in every single game this season, and they almost added a second within three minutes when Alves’s first-time volley from outside the area deflected inches wide off the outstretched leg of Pogba.
Ander Herrera threatened an equaliser for the hosts with a volley of his own which bobbled narrowly wide, but just one minute later PSG had their second to take complete control of the tie.
Again Di Maria – the victim of incessant abuse from the home fans – was the creator with a perfectly-weighted low pass into the box for Mbappe, whose pace saw him get ahead of the defenders and
composure allowed him to steer his finish into the bottom corner.
Pogba was sent off for a second yellow card in the final minute of normal time and will miss the second leg.
In the other fixture, Nicolo Zaniolo scored a brace in six second half minutes for AS Roma who edged Porto in their Champions League last-16 first leg.
Zaniolo drilled a low effort past Iker Casillas in the 70th minute to give the Rome based outfit the lead.
He added a second from six yards out after Dzeko’s 20-yard shot hit the post.
But Porto got an away goal when Adrian Lopez scored after Tiquinho Soares’ mis-hit shot landed in his path.
Roma, who are sixth in Serie A, had the better chances, with Dzeko having a shot tipped on to the post by Casillas.
It is a first defeat for Porto – excluding penalty shootouts – in 27 games. They had won their last five Champions League matches to come through the group stages unbeaten.
The second leg in Porto is on Wednesday, 6 March.