US aid for Venezuela lands in Curacao 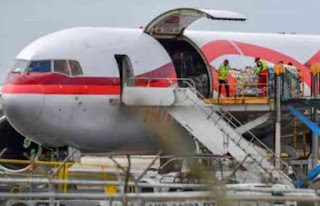 A plane carrying food and medical aid from the United States landed on the Caribbean island of Curacao Thursday en route for Venezuela, whose government has vowed to block it.
AFP reporters saw the jet land at the airport in Curacao, one of the focal points of a volatile standoff between Venezuelan President Nicolas Maduro and self-declared head of state Juan Guaido.
A dozen Venezuelan opposition supporters cheered and sang their national anthem as the plane touched down after flying from Miami.
Minutes later cargo handlers started unloading pallets of aid from the plane.
Organizers say the aid will help relieve Venezuelans suffering in an economic crisis.
One of the Venezuelan organizers of the shipment, Miguel Rodriguez, told AFP the aid would be transferred by Saturday to a nearby seaport where it would await the local government's authorization to sail for Venezuela.
Maduro has branded the aid a smokescreen for a US invasion.
He has vowed to block US aid from entering Venezuela across the Colombian and Brazilian borders and his government has ordered sea and air links with Curacao to be suspended.