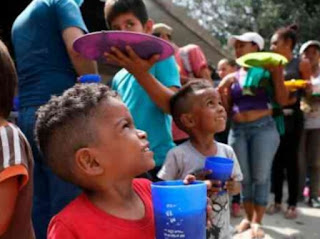 Venezuela will send food to feed hungry Colombian children, communications minister Jorge Rodriguez claimed Monday -- citing statistics about poverty in neighboring Colombia -- even as citizens in his country struggle with food shortages at home.
Rodriguez said in a televised statement that more than 20,000 boxes of food aid would be sent to the Colombian border city Cucuta, in an apparent retort to international efforts to send food to hungry Venezuelans.
Cucuta has gained international prominence as a collection point for foreign shipments of humanitarian aid to Venezuela, which have so far been rejected by the Maduro regime. It is also a first stop for many fleeing Venezuela; many of the needy children living there are in fact Venezuelan.
Opposition leader Juan Guaido, who declared himself the country's acting president in January, called on the international community to help feed Venezuela earlier this month.
The United States has already responded: On Saturday, the US Agency for International Development (USAID) deposited its second installment of supplies in Cucuta, including hygiene kits and nutrition products for children. So far, the aid is waiting in warehouses, and has not crossed into Venezuela.
According to an annual university study which closely monitors social conditions in Venezuela, almost 90% of citizens were living in poverty in 2017.
The study found that Venezuelans lost an average of 24 pounds -- a result of what some describe as the "Maduro diet," in reference to the rampant inflation and food scarcity that have swept the country under Maduro's leadership. Maduro has argued that Guaido's aid campaign is not needed, saying "We are not beggars."
However, the country did accept aid before its current political crisis, with 9.2 million in food and health supplies approved by the United Nations as recently as November 2018.
While the Venezuelan opposition plans to introduce shipments of humanitarian aid to the country on February 23, it's unclear how they will do it without the support of the military and police, who remain loyal to a defiant Maduro.