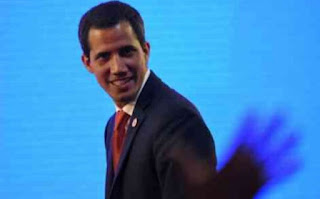 Venezuelan opposition leader Juan Guaido on Saturday called for nationwide protests next week to support volunteers planning to travel to the border with Colombia to bring in US humanitarian aid, the latest flashpoint in the country's political crisis.
"Not only will this be happening at the border where the volunteer movement will be, but in cities up and down the country where there will be demonstrations on February 23 for the aid to come in," Guaido told thousands of supporters at a public gathering.
The announcement came as tons of US food aid was piling up along the border. It has been denounced by President Nicolas Maduro, who has asked the military to reinforce the frontier, denouncing the food as a "booby trap" and a cover, he said, for a planned US military invasion.
Guaido told his rally that some 600,000 people had registered to help with the efforts to bring aid in, and he repeated his call for on the military to stand aside.
Humanitarian aid has become a key issue in the power struggle between Maduro and Guaido.
Venezuela is in the midst of a power struggle between socialist leader Maduro and Guaido, the head of the National Assembly who proclaimed himself interim president last month and now has the backing of more than 50 countries.
The once wealthy country is also suffering from a grave economic crisis that has left millions in poverty and facing shortages of basic necessities such as food and medicine.
Some 2.3 million Venezuelans have fled the country since 2015 as a result, according to the United Nations.
Maduro, the hand-picked successor to socialist firebrand Hugo Chavez, meanwhile blames Venezuela's woes on US sanctions.